Rich Neher publishes a blog called Tennis Club Business when not railing about “liberals” on Facebook.

Most people know that KKK members, skinheads, White Supremacists and other hate groups vote Republican. Democrats, on the other hand, are typically goody two-shoes who follow Christian principles such as “do unto others.”

Which makes it odd that Rich Neher believes that governors who are prohibiting public gatherings during the COVID-19 crisis are actually targeting churches because Democrats “hate churches.”

Below is an actual Facebook thread in which I try to explain to Rich Neher why governors are shutting down churches. Rich Neher, of Tennis Club Business, perpetuates the stereotype of the not-too-bright conservative, and even gets irritated that I apparently ‘talked down’ to him. 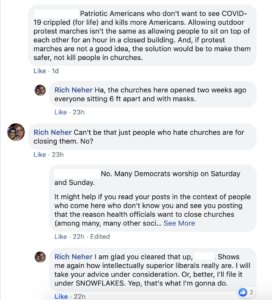 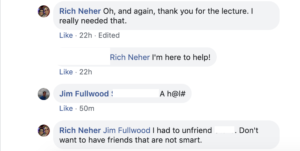 He is joined by Jim Fullwood, a retired tennis pro and school teacher who lives in Port Charlotte, Florida. Jim Fullwood wants to show that conservatives aren’t dumb, with a post that simply calls me an “A h@l#.” 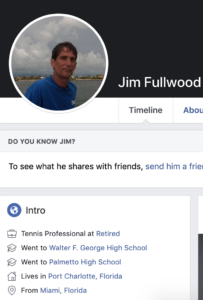 Not to perpetuate the “why do libruls think we’re stoopid” meme, but attorney Walter Mitchell of the Sterling Law group believes that 124-word Facebook posts are not only too long, but that they are “novel like.”

I don’t think that’s what they mean by “briefs,” Walter. 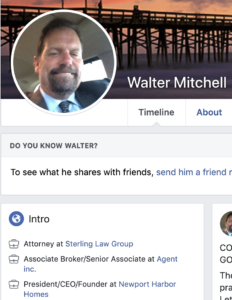 If you are curious about the intellectual level of Walter Russell of the Sterling Law Group, look no further for your answer. 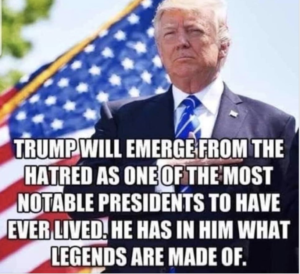 WalterMitchell also wants to abolish the American Civil Liberties Union. How exactly would you recommend conservatives “abolish” the ACLU, counselor. Maybe some of your partners at the Sterling Law Group can answer.

BTW, Walter Mitchell is doing so well as an attorney, he’s apparently working part-time as a real estate agent.

Rich Neher, of Tennis Club Business, continues to seethe on his Facebook page about not being dumb by saying that he had to unfriend me because I’m not smart.

Walter Mitchell and Jim Fullwood are very brave when they know someone can’t respond to their attacks. So, they won’t have a problem with this post.

So now you know the morals and intellect of Rich Neher of Tennis Club Business. Think Rich Neher still carries some of his German views in our country?

Maybe Joe Dinoffer of Oncourt/Offcourt, and Head Racquet Sports might want to reconsider their advertising support for this website and its owner.

•Should My Company Have a Blog?

•Social Media's Role in BC

•What Should I Pay?